A beautiful, sunny weekend greeted a truly exciting race and the debut of Lerici, a new venue on the national enduro scene. Marcello Pesenti wins his first Round of Superenduro, while Laura Rossin proves herself, again, the fastest lady in the Series. 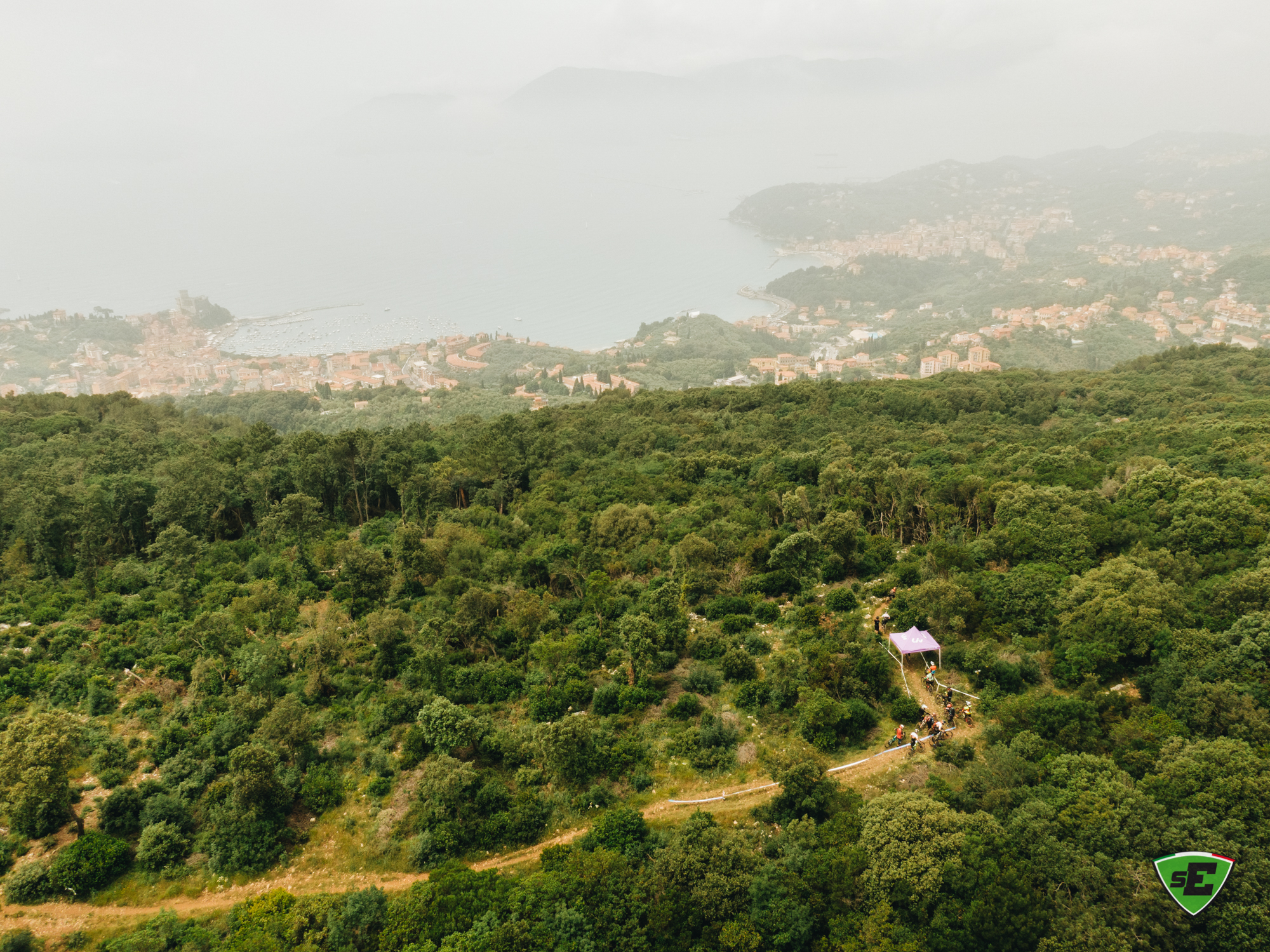 The race course
Lerici could not have had a better start. It has now been officially sanctioned as one of the top mountain biking destinations in Liguria. The venue has made its debut in the national enduro scene with an exceptional race: hard-fought, spectacular and well-organized. And if this wasn’t enough, it has also provided the arena to one of the most fiercely chased and deserved victories ever: the win claimed by Marcello Pesenti, finally on the top step of the podium of a Superenduro Round after having chasing it throughout 5 seasons.
Perhaps due to the fact that most riders were not familiar with Lerici’s trails, everyone had to figure out the best way to read the trails in order to be fast and efficient while racing. Narrow passages within dense vegetation, plenty of sprints to pedal and a classic Ligurian terrain were demanding some very physical riding from the riders.
And once they had gone the whole way down, the scent of the sea, the sunshine and summer temperatures – never excessively high – were literally embracing the riders within the amazing paddock area overlooking the harbour of Lerici. The third Round of the season, strongly desired by Lerici Bike organizers and by the local municipal administration, has perhaps come as a surprise but it has allowed everyone – once again – to discover a new corner of Italy, this time a pearl within the Gulf of La Spezia. We are sure that we will hear about it again. 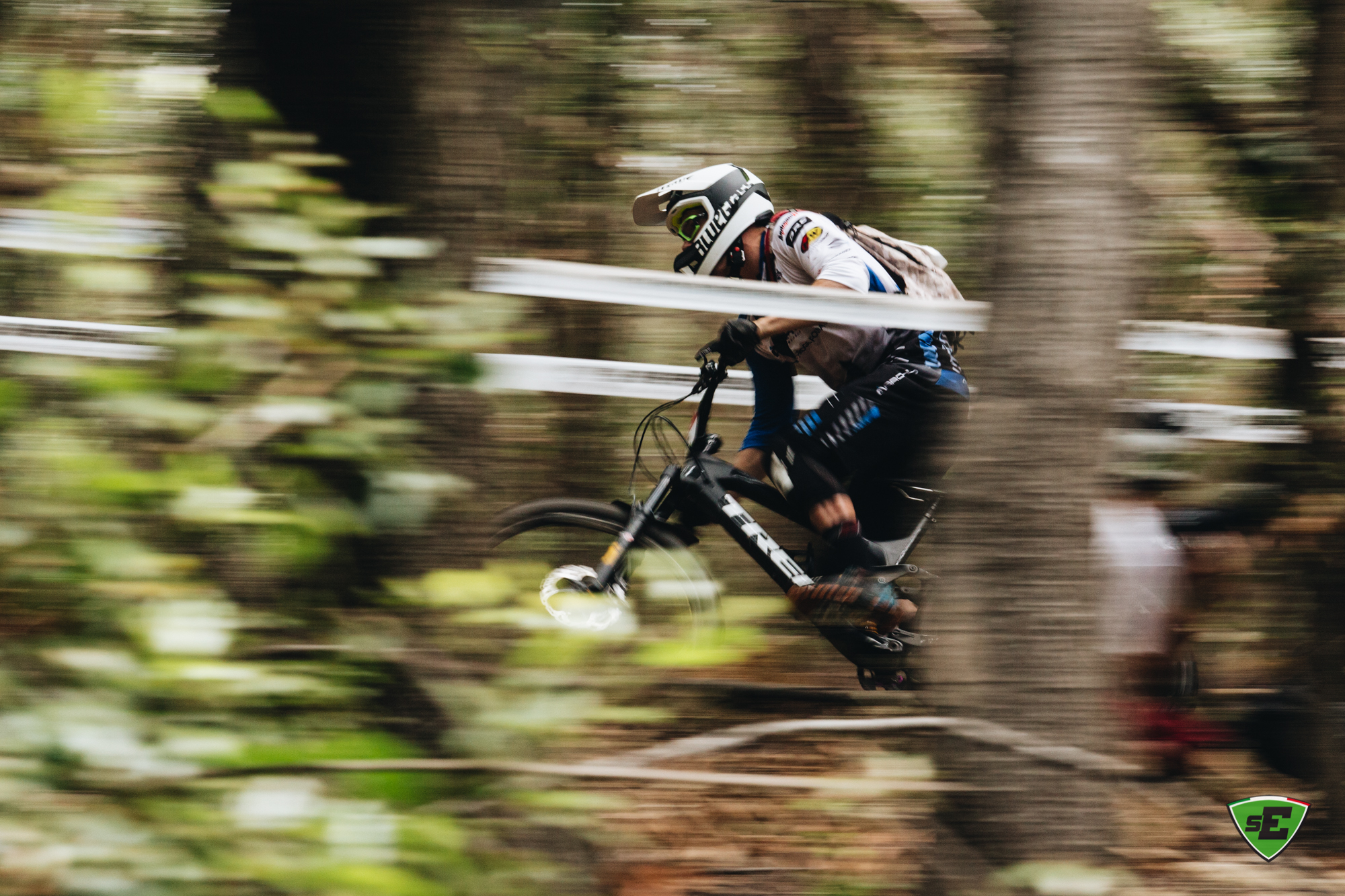 The Race
Riders had to face very insidious stages at the Round of Lerici. A race flagged by numerous flats and several mechanicals – especially to the drivetrain, at hard work during the whole competition. Who has spectated the Special Stages from close distance has seen – or rather heard – the strain to which these components were exposed, with frequent gear shifting under load and hits by the rocky ground. The race, despite the overall short distance of the Special Stages, required a lot of physical and mental energy. And finding focus and a good pace in a short time is always difficult.
Marcello Pesenti (Marchisio Bici Team) managed to do it. And he did it in the best way amongst all Men in the Open category, finally conquering what he defined “a god-damned victory” he has been chasing for a long time. Immediately behind him, Mirco Vendemmia (CMC Cycling Experience), more convincing and faster race after race. Marcello fought with him in an exciting duel that went right down to the wire. Nicola Casadei (Signor Lupo Asd), winner of the previous Round in Punta Ala, is third. The battle just outside the podium has been equally exciting, with 5 riders (Denny Lupato, Matteo Berta, Erwin Ronzon, Tobia Poloni and Simone Martinelli) within just 5 seconds. Laura Rossin (Soul Cycles Racing) winner of all Special Stages, including the final Urban Lerici Castle with its long final straight sprint, dominated the Women’s Open category. Francesca Bonanni (Vertical Bike) takes second, while Irene Savelli (DSB Comes Fristads), slowed down by a few mechanicals, closes in third. Amongst the Amateur Racers, the three fastest riders have really made the difference, leading by far their pursuers. Davide Carissimi (Bikappa Bikes) has been the fastest rider, closing the Round at 20:39 min, followed by Alessio Vercelli (Team Locca) 7 seconds behind and Marco Orsenigo (Asd Husqvarna Ridewill), third by only 57 hundredths of second. Francesca Lucchini, Francesca Pioli and Rachele Riolfo are, respectively, first second and third in the Women Amateur Racers. Francesco Braconi (Scuola Di Ciclismo Arezzo) wins in the Youth, while Ippolito Federico is second, followed by Giovanni Valenti, only 10 seconds behind. Worth mentioning that Francesco’s time in PS4 (2:34 minutes) would have been worth a place amongst the top 15 riders in the Competitive Racers category. This must be extremely encouraging for a young rider. The same goes for Sophie Riva (Ancillotti Factory), winner of the Women’s Youth category: with her time in PS4 (2:57) she would have taken second place, just behind Laura Rossin. Filippo Amerio wins in the Juvenile. For the ebike category, the victory goes to local rider Andrea Garibbo (Haibike Factory Team Italia) ahead of Mattia Folchi and Alessandro Bonarotti, B-Garage Mgo Deaneasy teammates. Andrea was on fire over the home trails, managing to take full advantage of the power of his bike in the sprints, and riding very clean and quick during the descents. Ancillotti Team wins again the Team category, Fristads’ riders are second and Cicobikes Team is third.
Thanks to today’s win, Marcello Pesenti takes over the leadership of the Series, but Nicola Casadei is at very short distance in terms of overall points. The 2019 Superenduro Champion will be decided in the Abetone Round, with a fully alpine race. 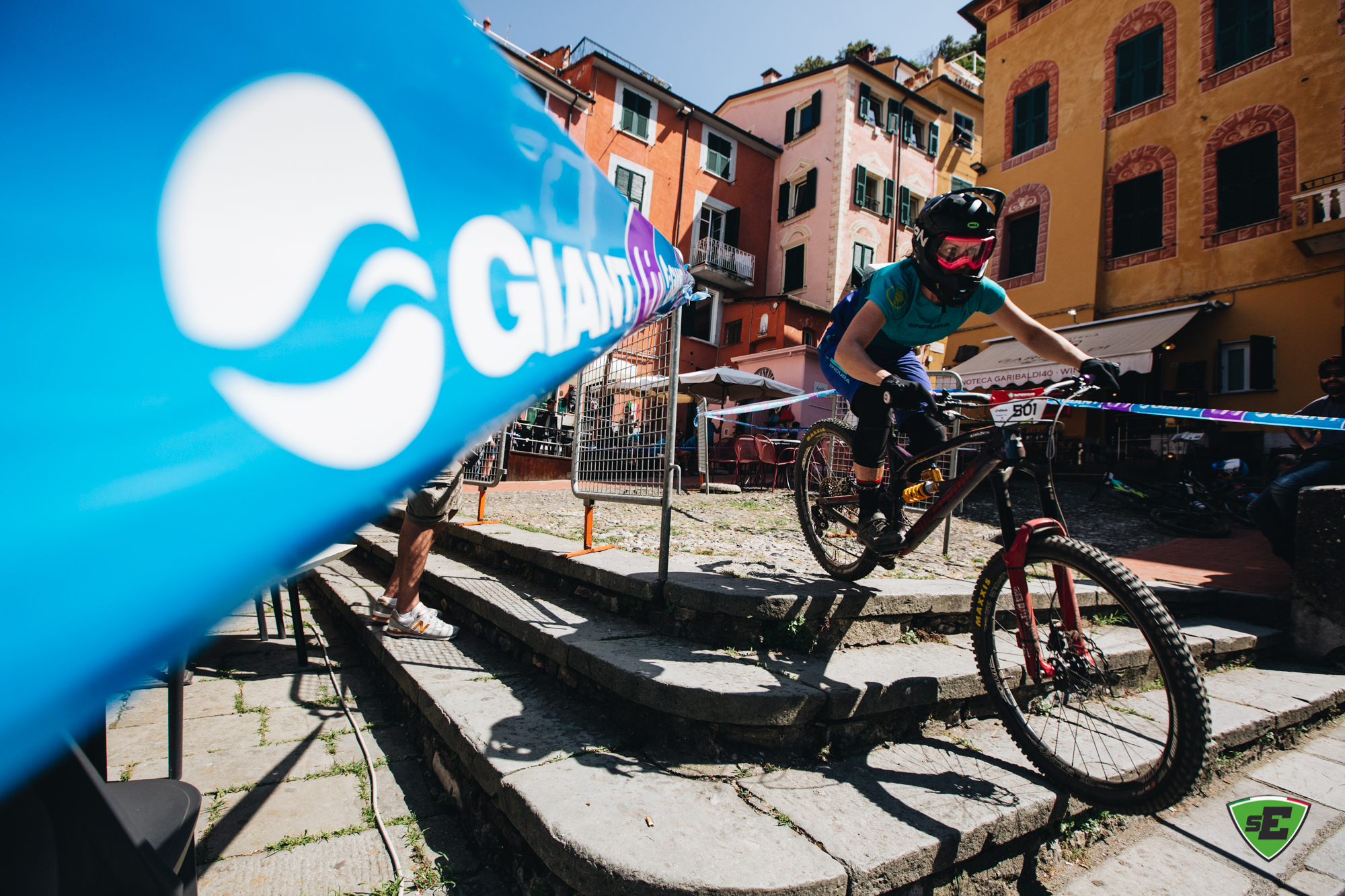 The impressions
Marcello Pesenti “It began as one of my usual races, with standard performance, then I made my comeback and put up a good fight with Mirco Vendemmia. At the start of Special Stage 5 I was determined to win and I gave it all. I’m stoked”.
Laura Rossin “I felt immediately at ease here, as I found many similarities with the trails I ride where I am training in Finale. I never had to push to the limit, I never made big mistakes and it all went well. Now Canazei, Abetone and then some relax on the beach before the grand finale” 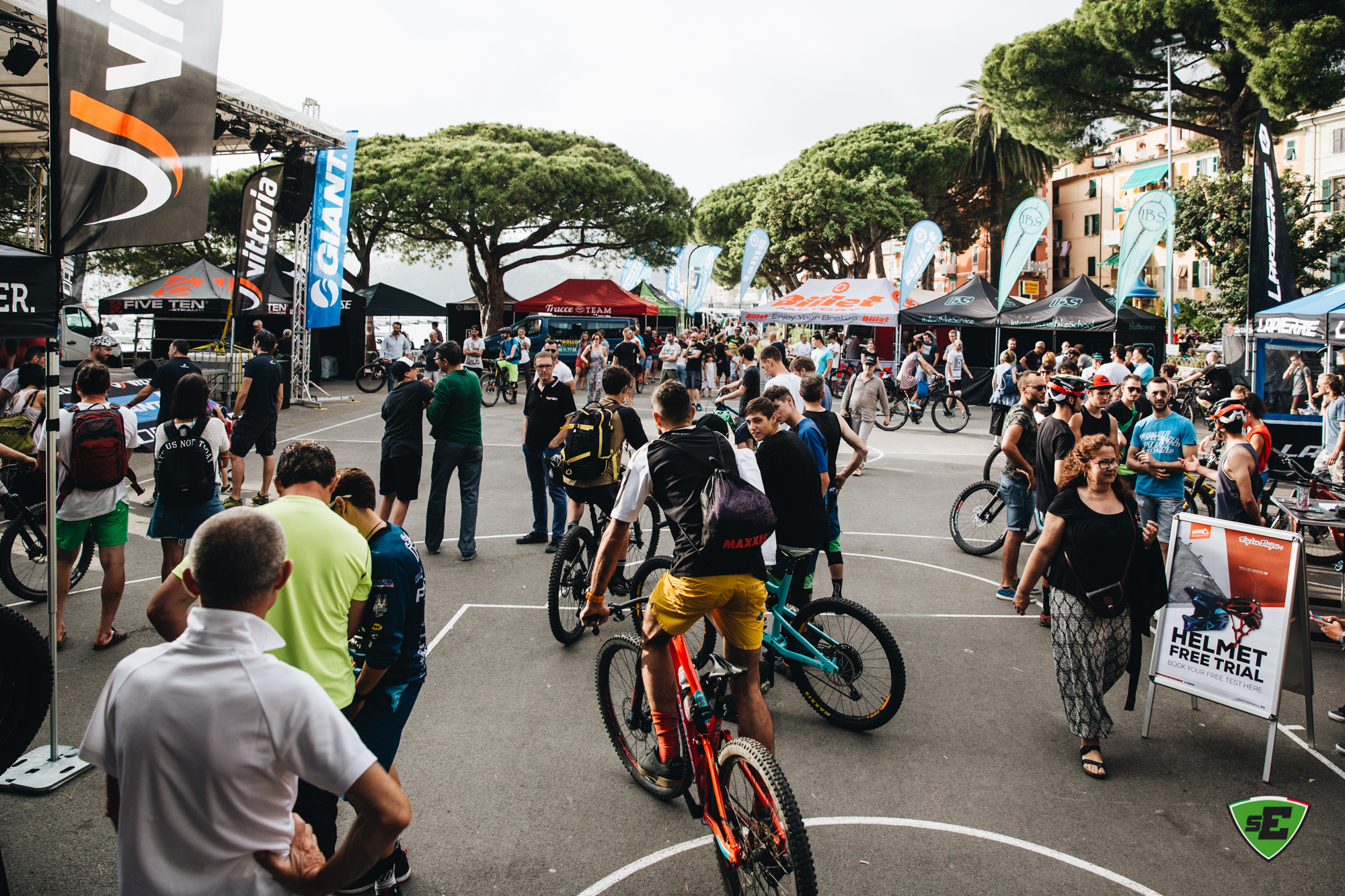 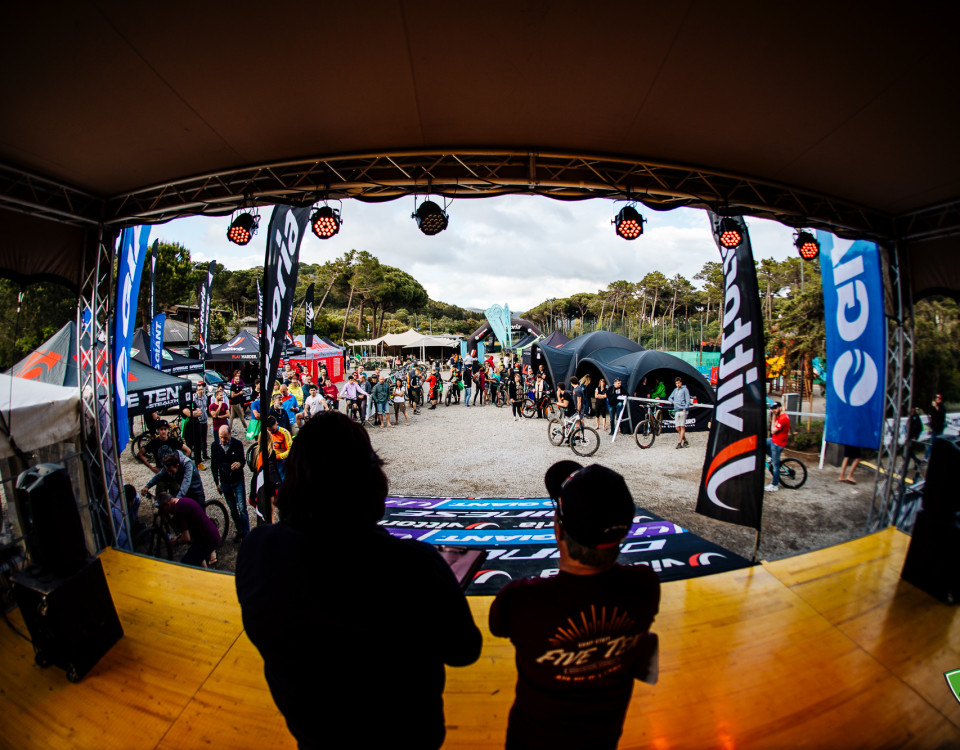