An exciting, full of surprises, race and this region, finally able to show its potential, have been key to the success of the 2016 grand finale of the Superenduro Series. 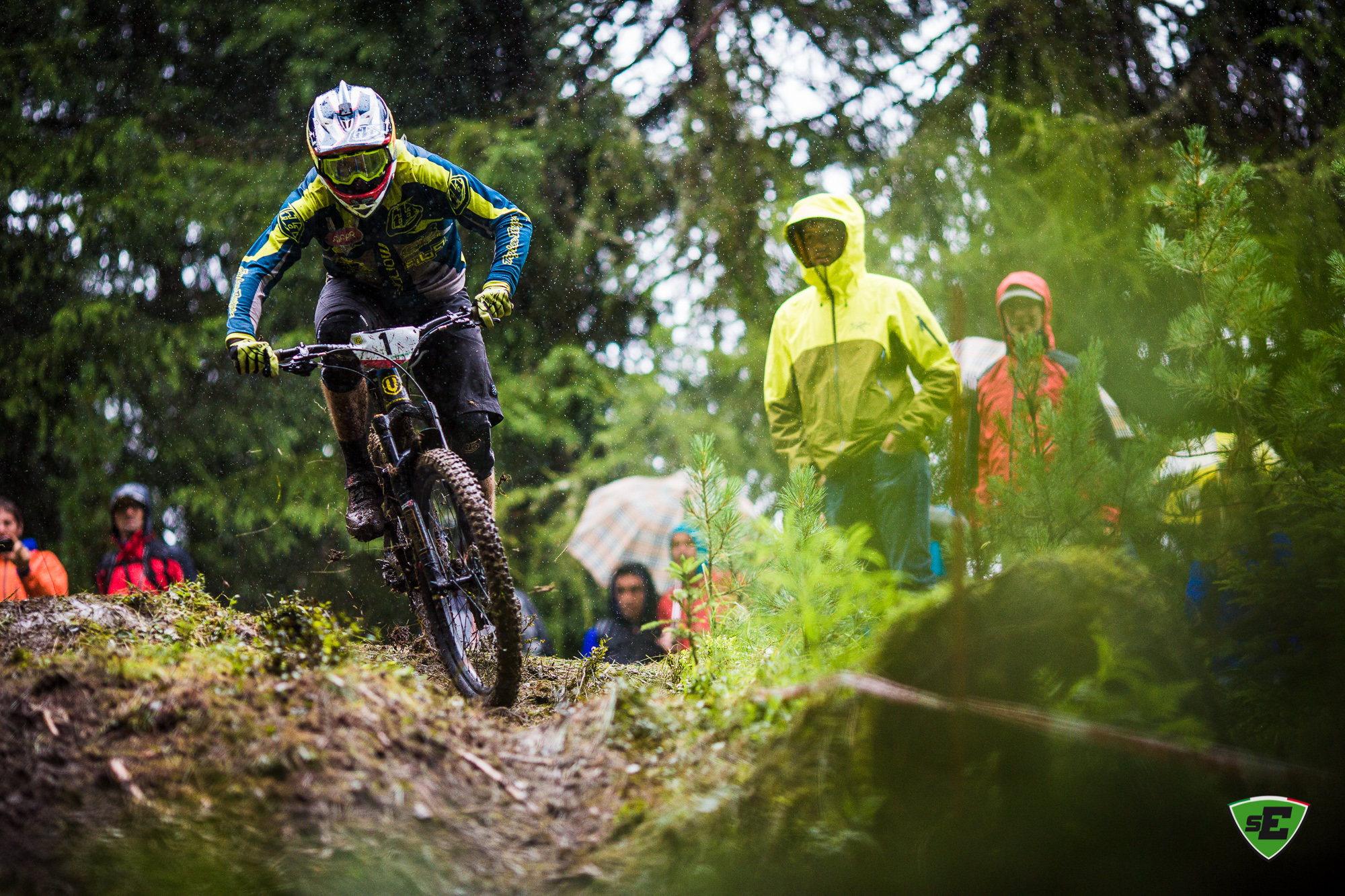 The last round of a hard-fought season of Superenduro powered by SRAM has just wrapped up at Santa Caterina Valfurva, the mountain resort perfectly located amongst the mountains within the Stelvio National Park.
The new Superenduro champions get to the highest steps of the podium after a quite complicated and unpredictable race: Marco Milivinti (GB Rifar Racing Team) local rider from Valtellina and Louise Paulin (Airoh ION Santacruz Team), originally from Sweden but now Finale Ligure’s citizen. Exactly as in 2014, the year before the break of the Superenduro Series, the two fast riders make clear that they will be the man and the woman to beat during the coming 2017 season. 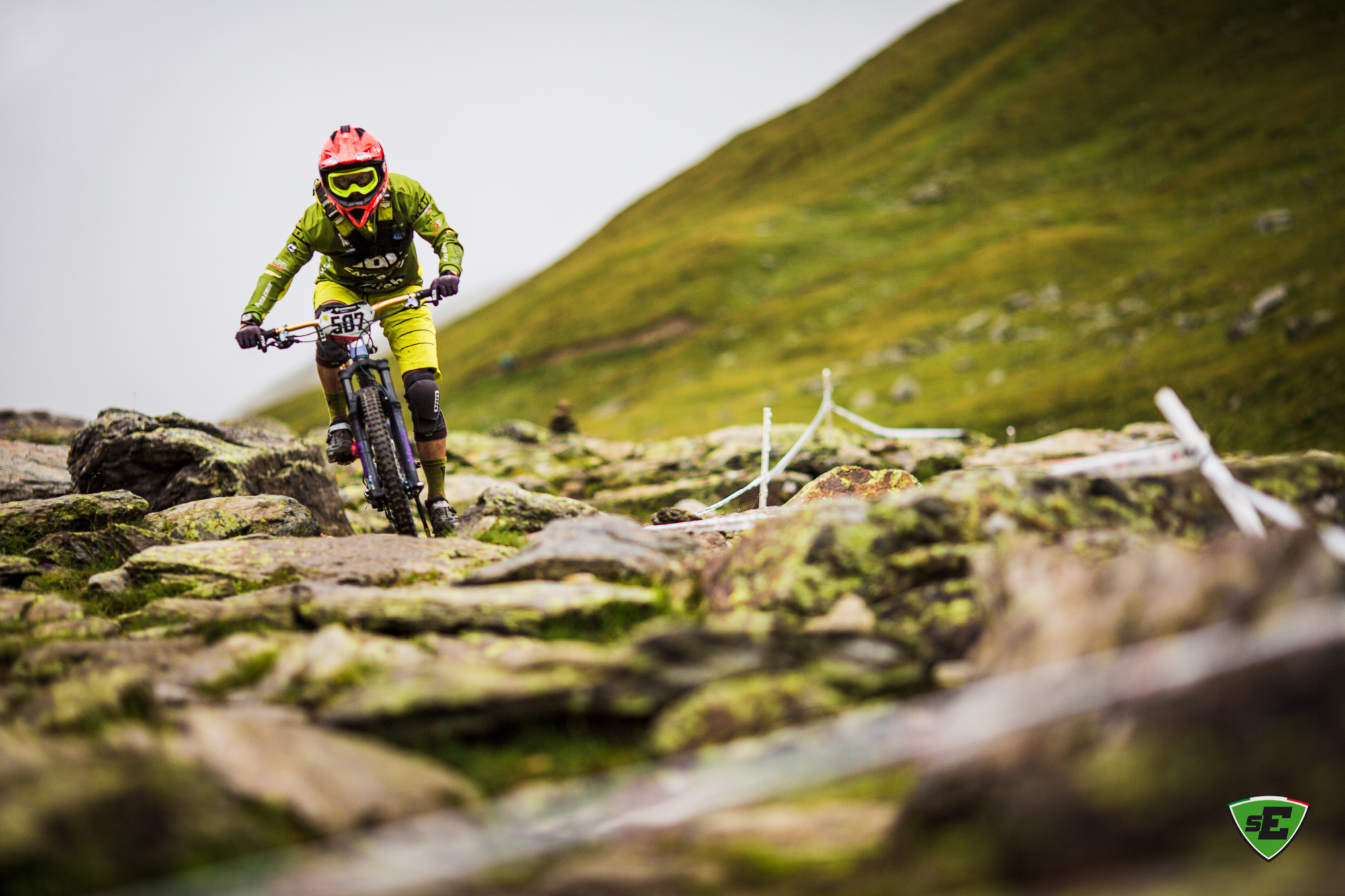 S.The race of Santa Caterina Valfurva has been epic. Tough conditions on the course and bad weather have made it uncertain and hard-fought until the last corner.
Since the night before, when the weather forecast was giving the chance of a big weather system reaching Valtellina, it was clear that the following day was going to be a tough one for everyone. And it has. It was imperative to re-design the race course: high elevation and gondolas do not get along well with thunderstorms!
The temperature was getting so low during Saturday night that it even started to snow at 2500 m. Considering that the start of Special Stage 2 was at 3000 m, it was obvious that the race course had to be changed, for safety reasons as well. The experience of Superenduro staff combined with the efficiency of the local organising machine at the Stelvio Natural Trail Park made it happen: a new race course was set, without two of the previously planned Special Stages but with the same level and attention to fairness, as expected for the grand finale of the Series. 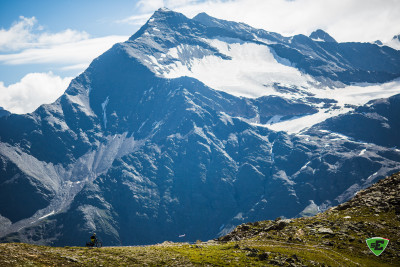 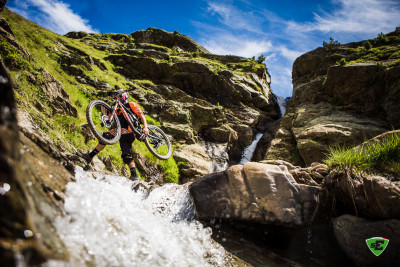 Saturday had been practice day: sunshine and breathtaking views over the glaciers and the peaks all around. But then on Sunday riders and teams found themselves sort of ‘catapulted’ into another planet, made of mud, slippery roots and green rocks; with completely different lines and passages and with a lot of work to do in terms of bike setup and tyres. But without any reference given by the practice day.
Besides endless crashes, flats and mechanicals that really added further suspense and anxiety to the scene.. and with teammates and mechanics staring at the monitors to see when their riders were passing through the Special Stages, what kind of time they were getting and how the whole race was going on.
The race soon made clear it was going to be a tough fight, right until the last corner, in almost all categories. 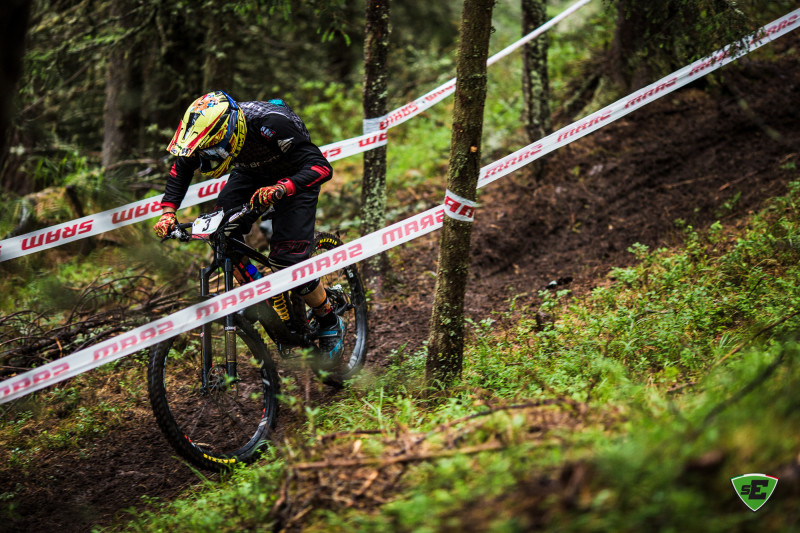 The Men’s general classification is topped by Marco Milivinti, who has been consistent throughout the race and has made it in front of another fast rider, Marcello Pesenti (Airoh ION Santacruz Team), by only 10 s and Martino Fruet (Lapierre Trentino Alé Team), who finishes 3rd by 25 s.
“Here in Santa Caterina I had a bad start and I made a lot of mistakes since the first Special Stage. This forced me to push hard later on but I kept faith until the end and the result is finally here. I am really pleased: today it has been very complicated and it could have gone in many ways”. – Marco Milivinti.
Alex Lupato (Cingolani Trek Team) unlucky during PS3 (when he got 48th) but very quick in PS1 and PS5 (fastest rider in both Stages) takes the seventh position on the day. However, the earned points allow him to claim the second spot of the Series general classification, behind Milivinti (first) and in front of Pesenti (third). 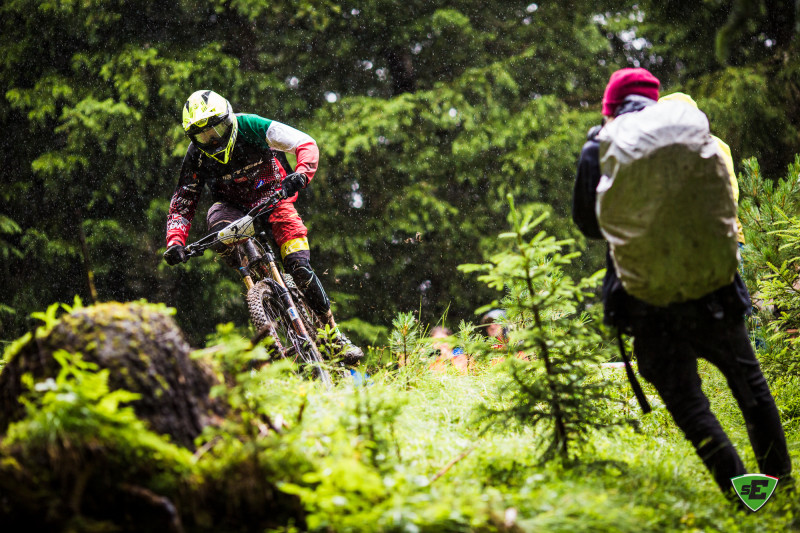 Vittorio Gambirasio (Officine Red Bike Team), Italian Champion in the discipline, cannot find the right pace at this round and due to a few mistakes he manages to close in tenth and loose the third position in the Series General ranking, giving it to Pesenti.
In the Women’s, the race has been dominated by the excellent Louise Paulin (Airoh ION Santacruz Team), who made a brilliant race, fast and regular, and who brings home the round victory together with the 2016 title of Superenduro champion.
“It has been a tough race, but yet good fun. I tried to keep under control the urge to go fast and I did my best not to push too hard and make mistakes: this really gave me the chance to bring home the victory”. – Louise Paulin 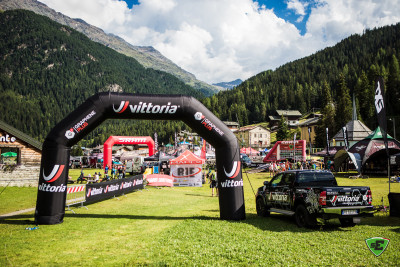 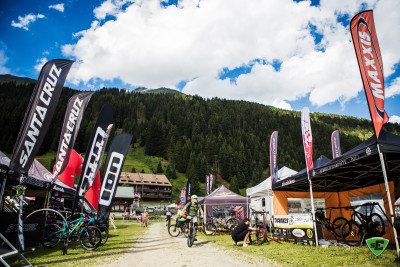 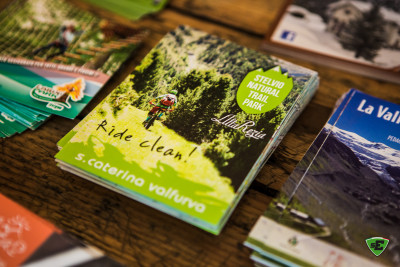 Her closest chaser in the Series ranking, Sara De Leo (Ancillotti Team) takes fifth, after a crash during PS1 that really put her immediately out of the game with a impossible gap to close. She had a problem with the front brake and she had to ride the whole Special using the rear only. In those conditions, it was impossible to find the best lines. The challenge is only postponed to 2017.
In third and fourth position on the day there are Anna Oberparleiter (Lapierre Trentino Alé Team) and Jessica Bormolini (Alba Orobia Bike Team), by 1.31 min and 1.34 min respectively behind Louise, both really good in managing such a complicated race, maintaining the gap unchanged over almost 20 minutes of timed race.
Valentina Macheda (Lifecycle Team) takes fourth on the day and earns enough points to overtake Laura Rossin (Bike Garage Revolution Intense ION Team), who missed the race, in the general classification of the Series and to bring home a good third spot behind De Leo and Paulin. 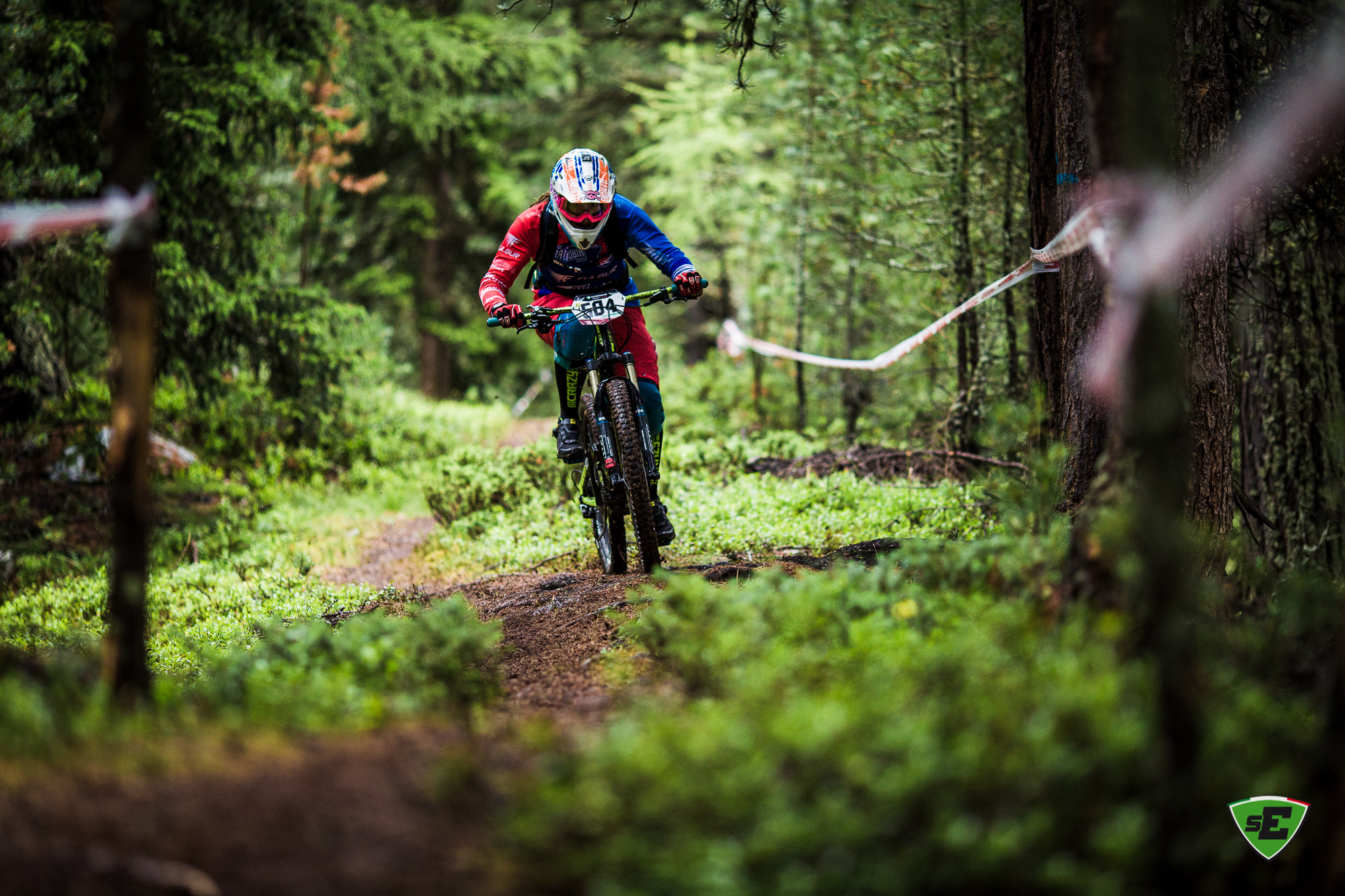 In Youth, for the two categories SEG and SE1, both in considerable growth during this comeback season of Superenduro, Simone Pelissero (Ancillotti Team) wins the round and takes second in the Series ranking, behind Luca Caramellino (Ancillotti Team) who claims second at Santa Caterina but who takes the top spot in the point classification. Matteo Saccon (Cingolani Trek Team), now fifth, still managed to take the third step of the podium in the Series, against his direct chaser Filippo Masotti (Ancillotti Team) fourth in both Round and Series.
In the E-MTB category, Giorgio Righi’s leadership (Essere Team) continues without issues as he manages to keep behind Morgan Lusa (Mtb Cesena Team) and Marco Caramellino (Wd40 Factory Team).
Santa Caterina Valfurva has shown everyone its harsh nature, typical of any high alpine resort, passing from a day of sunshine at 25°C to 10°C in just a few hours, but at the same time it has been able to show the enormous potential that this territory has for the enduro enthusiasts who come here to ride these fantastic trails. 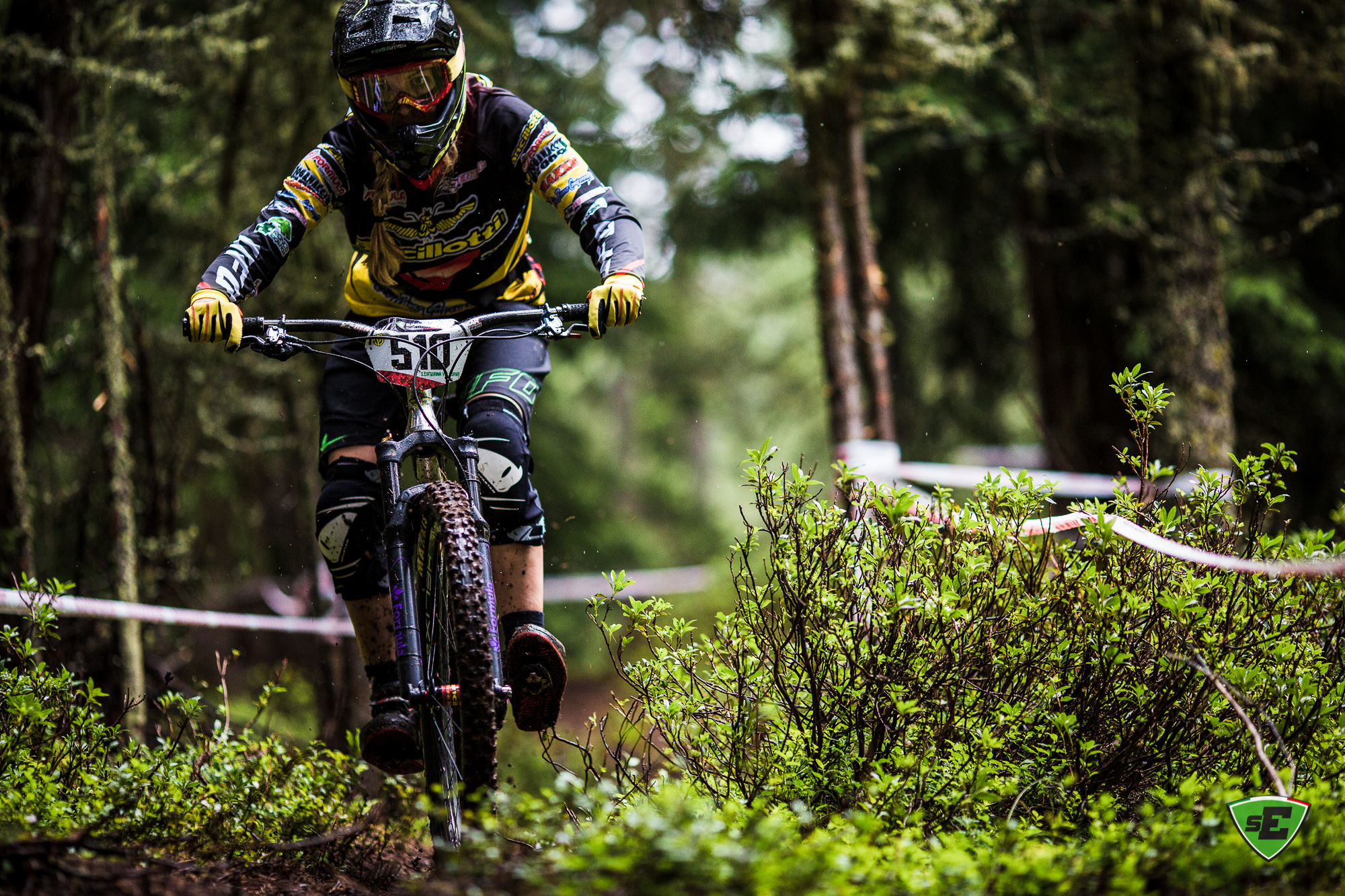 Superenduro cannot wait to see you again in between the 30th September and 3rd October at Finale Ligure when FLOW, the outdoor festival, will host the EWS grand finale and the awards ceremony of the Superenduro Series.