Superenduro comes to Canazei for the second year in a row and, again, pleases everyone with a very technical race and tracks able to test every biker’s skills, in the heavenly Dolomites of Val di Fassa. 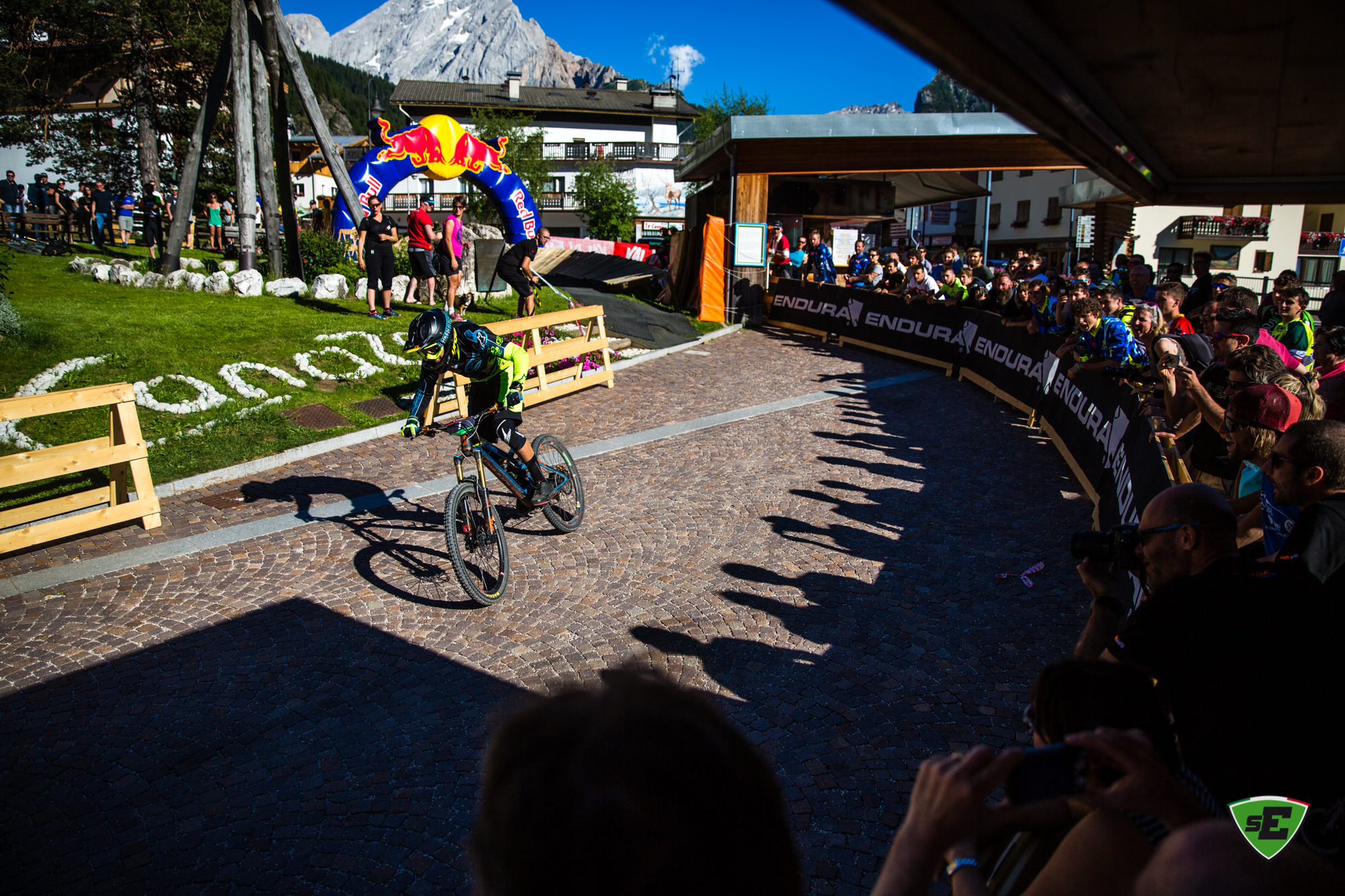 The second round of the Superenduro season has just wrapped up here in Canazei, Val di Fassa. It has been an exciting, spectacular competition, tight and tense until the final corner.
The 500 riders who entered the event from 13 different countries could enjoy the traditional and well-known hospitality of this excellent resort, where the love for all outdoor sports can be felt everywhere: climbing walls, adventure parks and loads of other activities for all sorts of enthusiasts, in perfect harmony with the amazing surroundings. 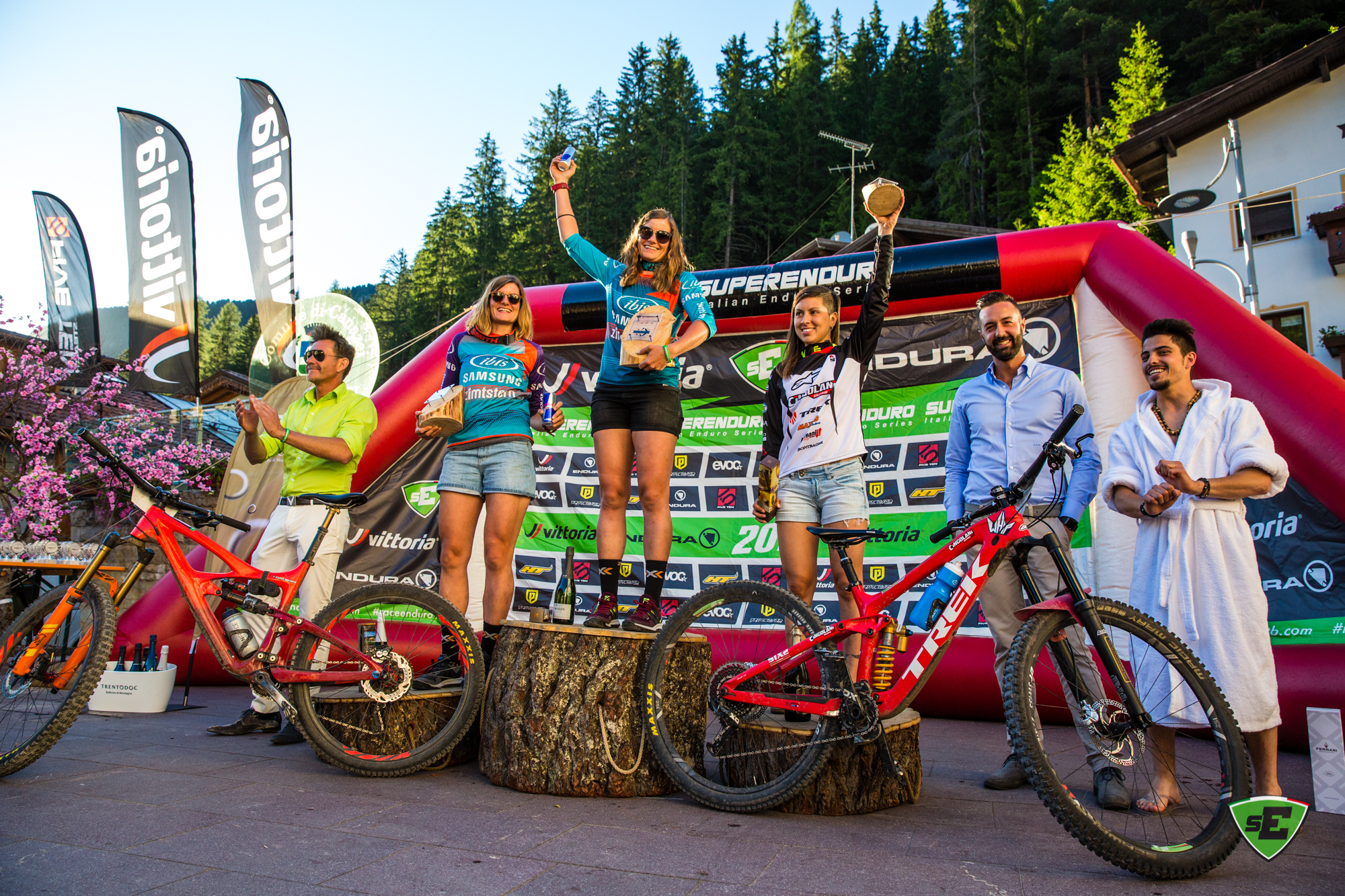 The Drop Down Canazei will certainly remain in everyone’s memory as one of the Superenduro rounds with the most challenging tracks on offer and with the most impressive amount of descending. But it will also be remembered as one of the races with the closest margins ever amongst riders and, as it happens when racing is tight, for the amount of fun offered to the fans packing the streets along the final through-the-town Stage.
After more than 26 minutes of timed Stages, only 0.44 seconds separate Matteo Raimondi, the final winner, from his teammate Marco Milivinti (GB Rifar Team), who takes second. Third by only a whisker (+1.35 sec) is Denny Lupato (Cingolani Trek Team).
On the finish line, Matteo Raimondi relates: “I didn’t think I could do it: I was still quite a few seconds behind Marco. But then he made a mistake while I stayed on the defensive riding clean. During the town Stage I figured out that the gap was actually very tight: I started to push hard and I managed to pull it off. I am very happy”. 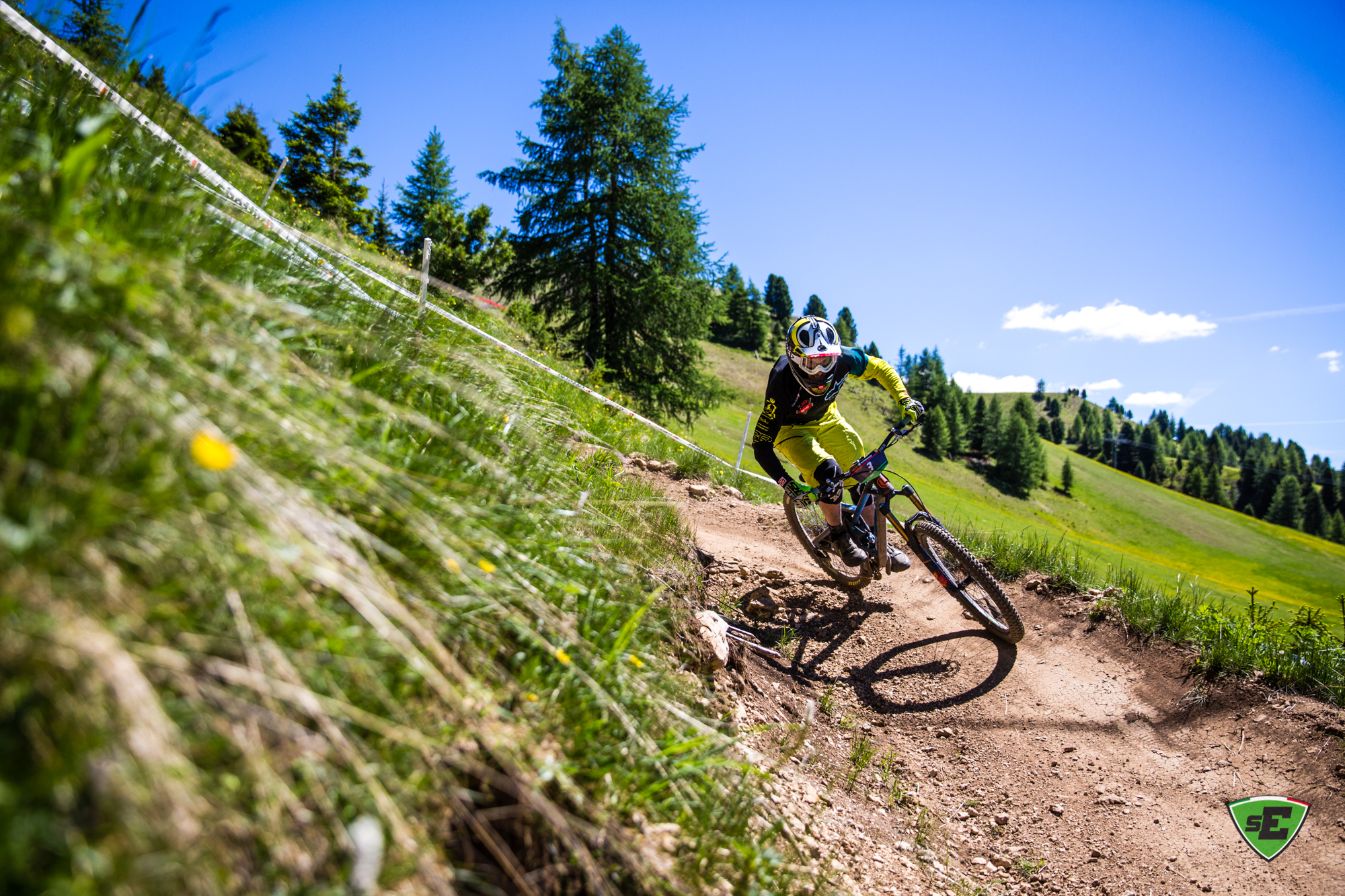 Winner as well of the previous Gualdo Tadino round, Matteo confirms his good form, both physical and psychological, with an important double-win that allows him to collect good points in the overall and a solid advantage over the pursuers.
In the Women’s field, constantly growing, the battle has been equally exciting: there were 30 ladies at the start line, also thanks to WOW – Woman On Wheels, that was taking place over the same days. 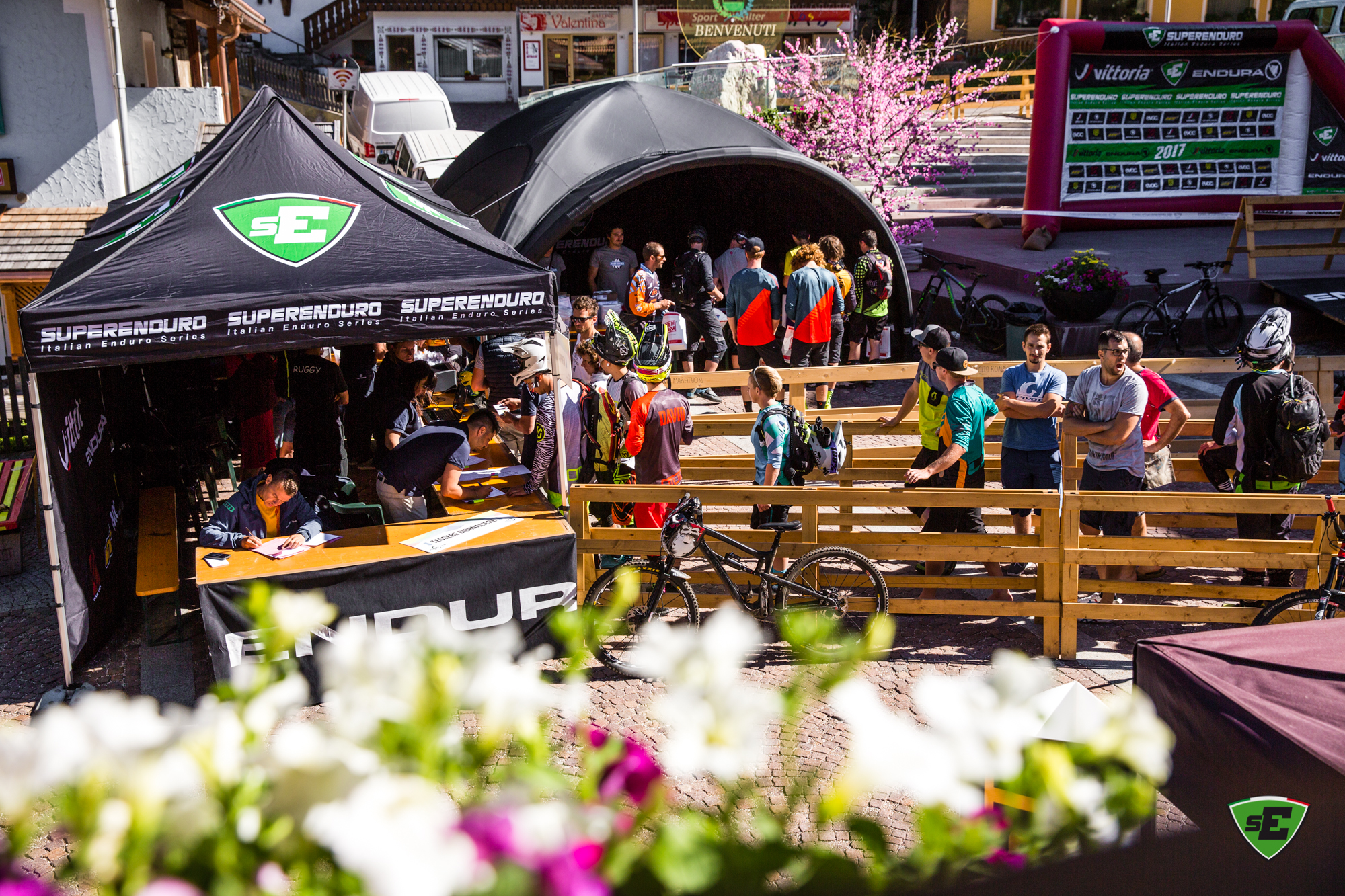 Caroline Gehrig (Ibis Cycles Enduro Race Team), from Switzerland, started pushing hard in the second Stage and extended her advantage to a 16-second margin that earned her first place. The race for the second step of the podium has been a real battle; between Anita Gehrig (Ibis Cycles Enduro Race Team) and Italian champion Alia Marcellini (Cingolani Trek Team) who won the first Special Stage but at the end of the day came in third by only 2 seconds.
Interviewed at the end of the race, Caroline says: “This is my first win at Superenduro and I am stoked. What really makes me happy is sharing the podium with my sister, with – and against – whom I ride throughout the year in many competitions all over the world. Usually she is the one who wins, but this time it has been my turn. A victory here, in Canazei, on these trails, is a massive satisfaction”. 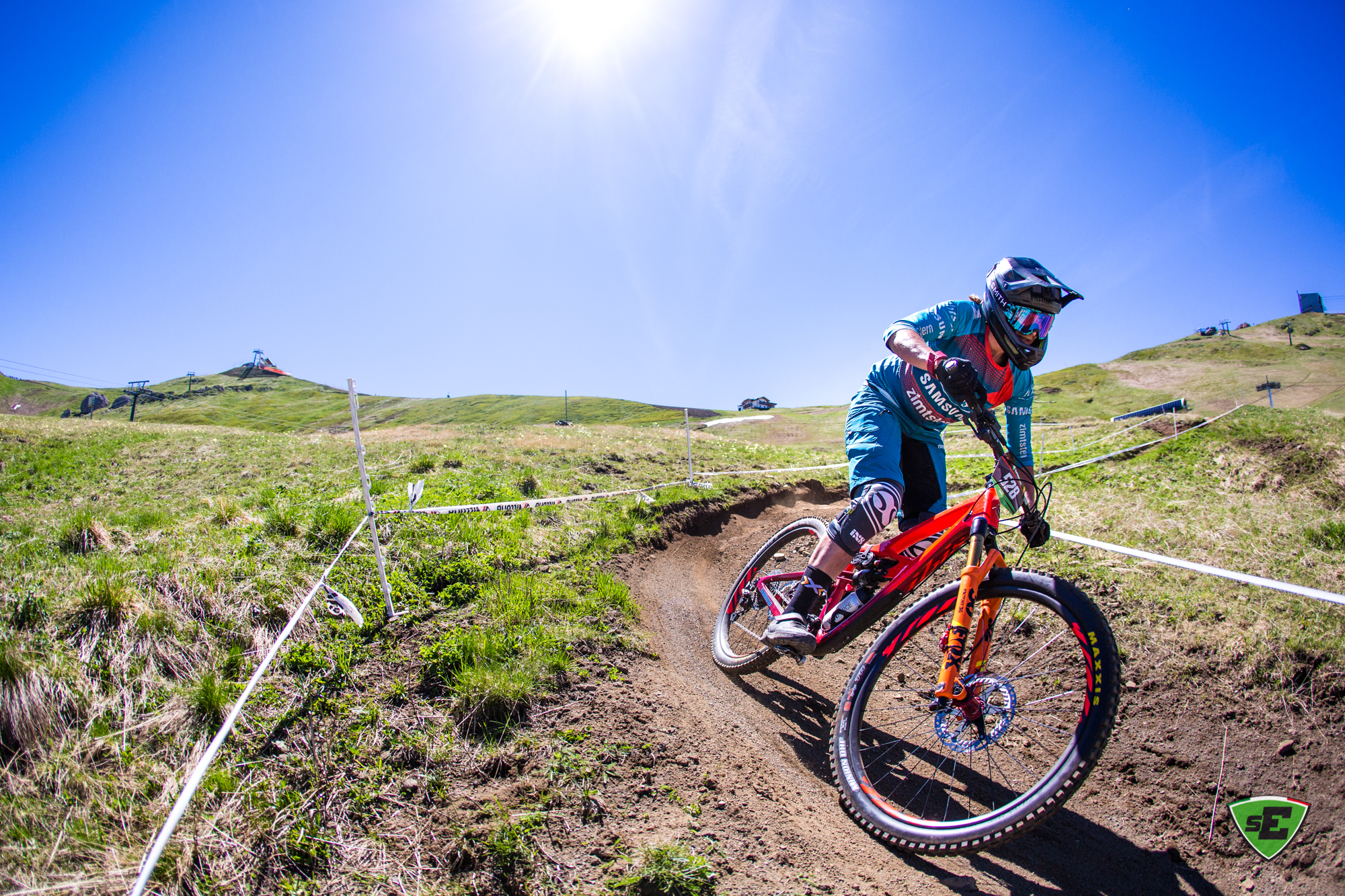 In Youth, a well-represented category with 30 racers entered, Simone Pelissero (Ancillotti Factory Team) takes the win. In the E-Bike category the quick rider of the Cube Action Team from Switzerland, Gustav Wildhaber, dominates the race.
Overall the round has been a huge success amongst the riders, especially thanks to the quality of trails, some tweaked with respect to the previous edition and others completely brand new, as in the case of the amazing Special Stage four in Val Duron. Although the large participation, far more than anticipated, made very happy the crew organizing the event, it complicated the access to the lifts and resulted in a general delay of the riders’ start times. Reluctantly, the organizers had to cancel Stage five.

William Basilico co-founder of Fassa Bike declares: “Events of these proportions need a lot of work, well ahead and by a lot of people. I am pleased with the way the crew responded and reacted to the unexpected issues when the race was well under way. Year after year we acquire more and more experience: I know it will be beneficial when the events will be even bigger”.

Superenduro now takes a short break and in less than one month, on the 15th and 16th of July, we will head to another alpine venue: La Thuile, in the Valle d’Aosta region, for the third round of the Season.