The fourth and penultimate round of the 2017 Superenduro season has just wrapped up: the weather made for a complicated race, but it also spiced the event up. The small venue in the Parma province has been a real discovery for many participants: with loads of amazing trails the MTB future of this destination is bright

It is in the DNA of enduro and of all the enthusiasts of the discipline: the innate desire and constant hunting for new places, where fresh trails make for perfect riding spots and racing venues.
Unknown trails offers a unique experience and fuel the riding passion even more. This is exactly what happened at Calestano during the fourth round of the Superenduro National Series. 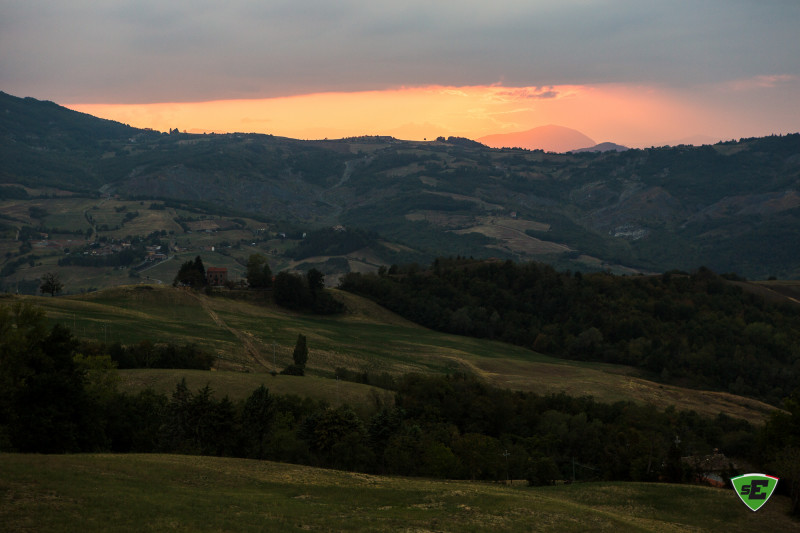 Racers from 11 different countries were presented with really amazing and complete trails, polished up by the Alpicella Bike Park local crew of trail builders that will definitely help this venue make a name for itself.
After an open practice in dry conditions on Friday and Saturday, heavy rain stirred things up and made the final part of this battled championship even more unpredictable, changing track conditions and making the racecourse very tricky, heavy with mud and incredibly slippery at times. 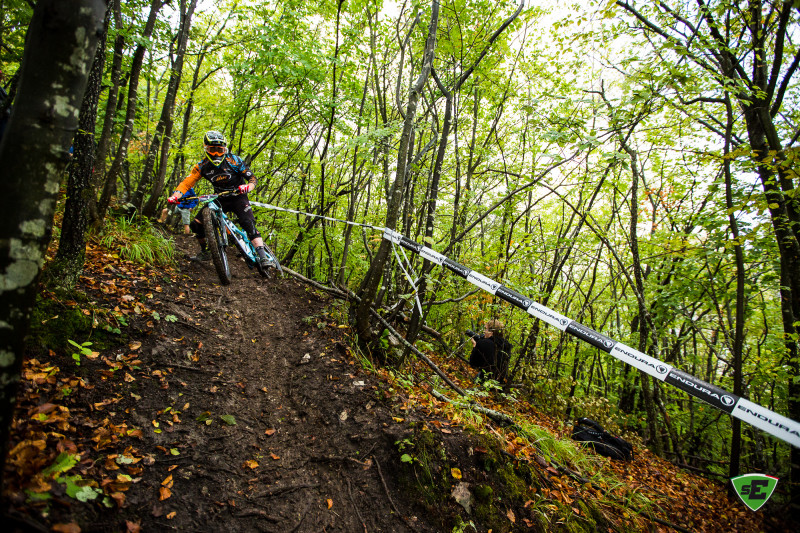 Vittorio Gambirasio (Red Bike) had some solid lines and was the fastest in Stage one, gaining over 20 seconds, a margin that he managed to extend over the following stages.
“I pushed hard despite the initial margin and even though I wasn’t 100% on form, I kept it together until the end. In conditions like today’s, pedalled sections weren’t making much of a difference any more, so mud tyres both front and rear have been the right way to go. The points collected here in Calestano are important for the overall but the game is not over yet: it will all be decided in Santa Margherita Ligure” Vittorio tells us after the race. 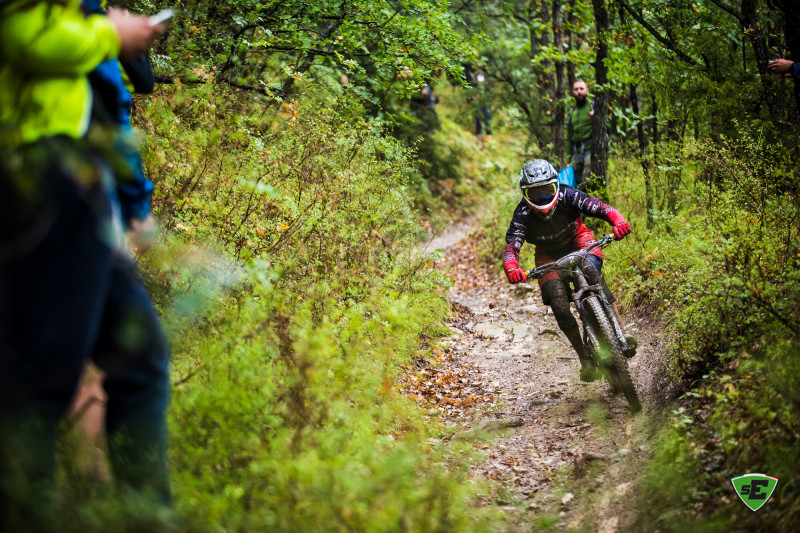 Nicola Casadei (CMC Cycling Experience) is hot on his heels 34:38 seconds behind, while Alex Lupato (Cingolani Trek Team) is third at 49:19 s.
With only one round to go, the grand finale of Santa Margherita Ligure on the 22nd of October, Vittorio strengthens his position with a 1960 points lead, followed by Casadei with 1820 points and Milivinti with 1580. Further behind is Matteo Rimondi, another key player during the season, who took fifth and holds 1500 points in the overall. 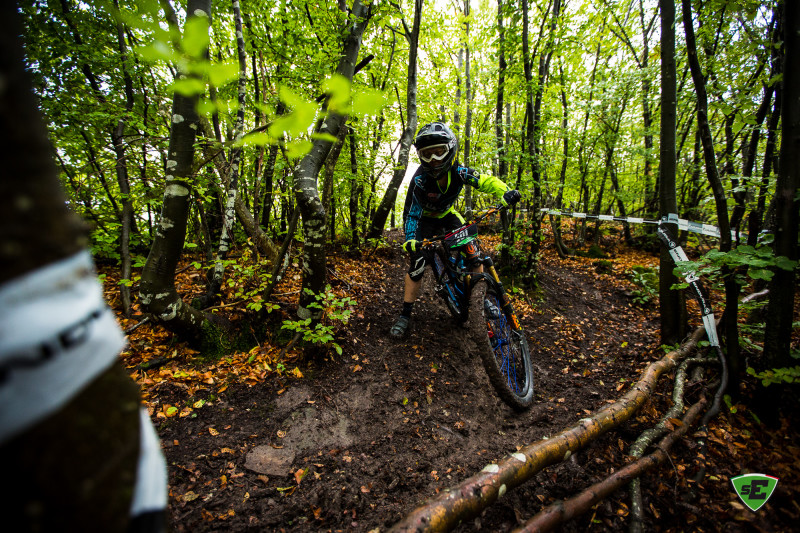 In the women’s category Laura Rossin (GB Rifar Mondraker Team) scores the hat-trick and wins all Stages with a solid margin over the rest of the field: almost two minutes over Nora Konem (Cycling Academy Friends) from Israel and a huge 13:46:83 minutes over Jessica Bormolini (Raptors Bike ASD), who takes third.
“I step back on the top of the podium after a long pause and a troubled period; I was missing the taste of a win. I am stoked with the whole season: at every round you can measure yourself against an international line-up of riders; this makes me very happy and it is really motivating” declares Laura Rossin. 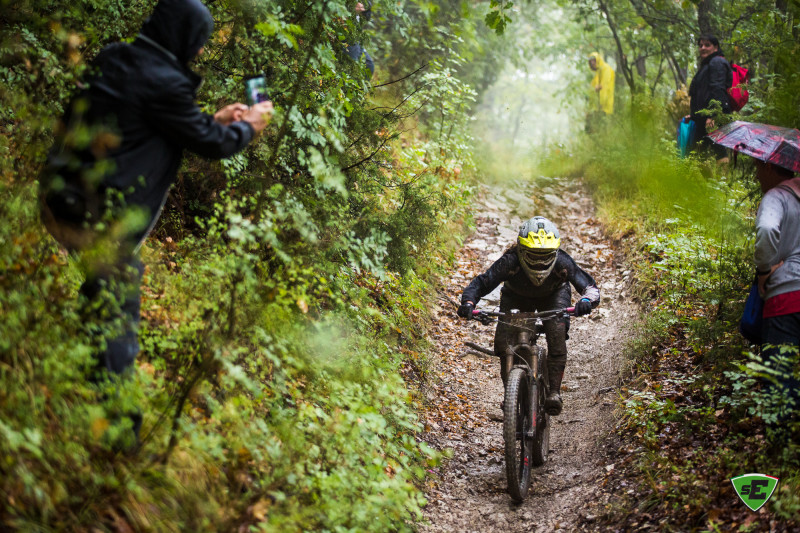 In the E-Bike category Gusti Wildhaber, the fast Swiss rider of the CUBE Action Team takes the win again, over Marcello Ghidini (Beltrami TSA Gravity) and Giulio Guadalupi (Mysticfreeride ASD). Being able to slow down and handle an e-bike in these conditions is not easy and a total time of 26:05:90 earns Gusti a solid fifteenth place in the overall. 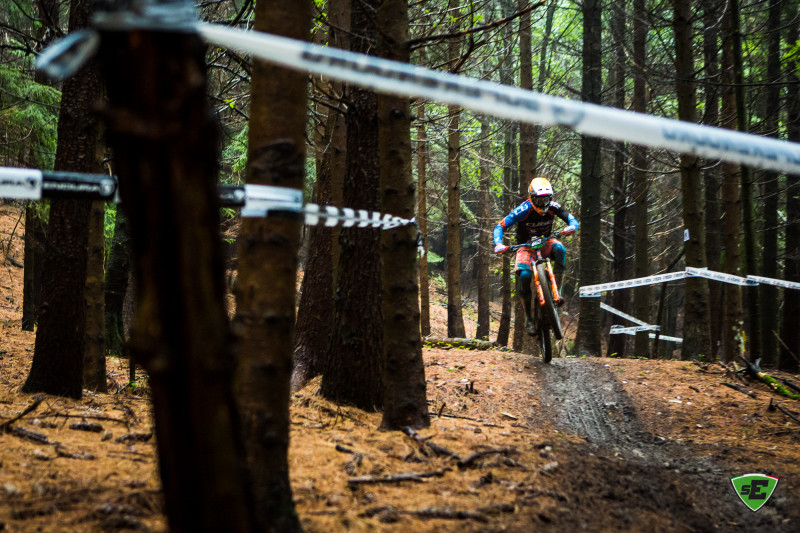 In Youth, Simone Pelissero (Ancillotti Factory Team), secures himself the top spot over Andrea Garella and Denir Adobati (Bike&Co ASD). The young shredders raced over Special Stage Four, the longest of the whole Superenduro season, and Simone rode it in 11:53:43 minutes, a time worth a top 20 position in the overall classification. 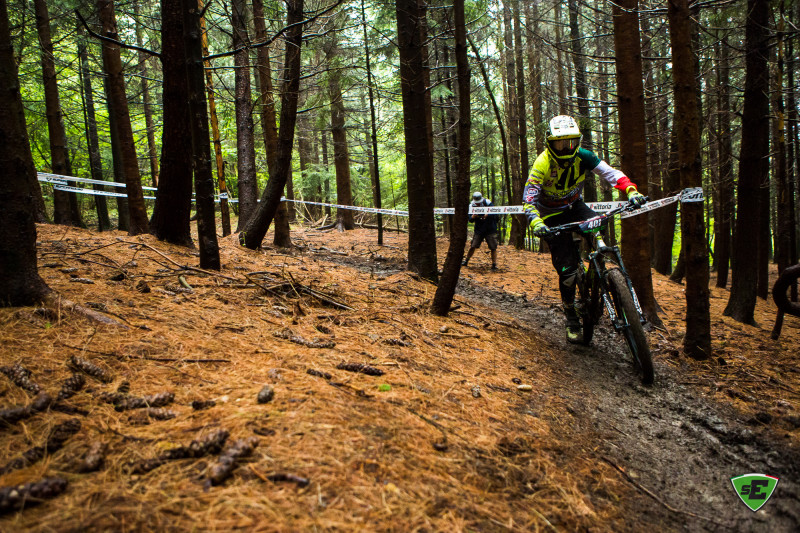 At Calestano today all racers rode out of their comfort zone, feeling the pressure of giving it all in extreme conditions and with minimal knowledge of the terrain. All riders racing at Calestano today challenged themselves, but they gained a wealth of experience that will allow them to grow as mountain bikers, in a discipline that never falls short of emotions. 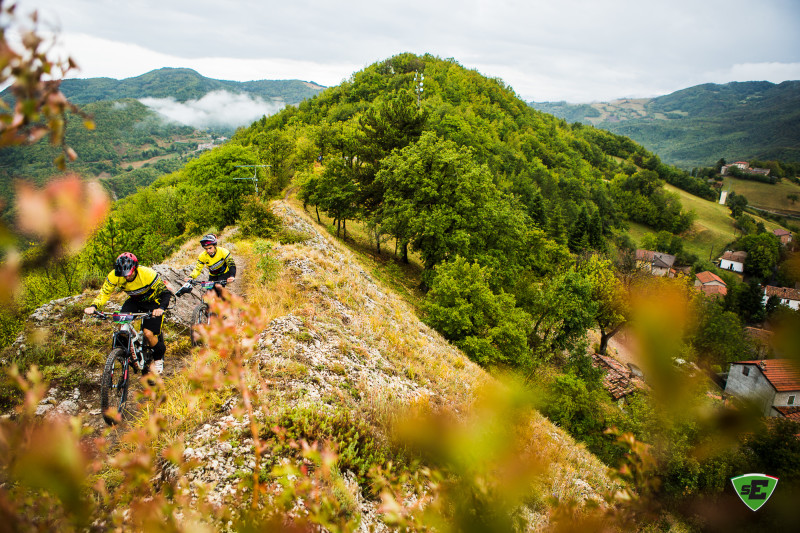 The final round of the season will be on 21/22 October at Santa Margherita Ligure, Liguria: see you there!